How to counter the counterfeiters with a software solution

Imagine if, as a CEP professional, you could capture illicit goods as they are transported through your doors. You could really help your customers combat the trafficking of fake copies of their products. You could be the go-to distribution centre for certain big brands. You could even levy a charge for your services!

That’s all become possible with the development of new technology that identifies and processes counterfeit goods at the point of sortation in a CEP business.

We look at the problem of counterfeit goods, why the issue is becoming increasingly problematic for the CEP sector and the software solution addressing the problem.

The problem of rising counterfeit goods

If there’s one thing we know about the trade in counterfeit goods, it’s that it continues to grow at alarming rates.

The alarming scale of the problem

In 2016, trade in counterfeit and pirated goods amounted to as much as 3.3% of world trade (to put that in perspective, that’s roughly equivalent to the GDP of Sweden or Belgium), and up to 6.8% of goods imported into Europe.

The problem impacts a growing number of industries, from common consumer goods, to luxury items, to B2B products and IT goods.

Parcels easily avoid detection as enforcement authorities are unable to cope with the volume of fakes and there is no authority after customs to check and counter goods. And despite dedicating big budgets to stop counterfeits, brands are losing the fight with miniscule percentages of illicit goods being caught.

CEP companies are being viewed as part of the problem

The dramatic increase in online purchasing and small parcel shipments has exacerbated the problem and according to the OECD and the European Union Intellectual Property Office, there is quantitative evidence that small parcels are being misappropriated to transit counterfeit goods across global markets either through postal or express services.

With global trade authorities identifying the role of the sector in the conveyance of counterfeit goods, it’s clear the issue is becoming problematic for the CEP industry.

It’s timely therefore for CEP companies to step in, help their customers prevent the trade and create new value while doing so.

Development of a new kind of KYC software solution

It is for this reason that Berlin-based company, Countercheck, has developed a know-your-customer (KYC) software service to help the fight against counterfeits. The technology, a machine learning software developed to identify and process counterfeit goods at the point of sortation, is currently being piloted in CEP companies.

The nuts and bolts of how it works

The solution brings the CEP company and its customer brands together in one platform through a layer of software. Brands upload their existing counterfeit data to the platform and through OCR camera technology, the software is able to cross-reference the data with every parcel travelling through sortation.

When a counterfeit item is detected, it’s isolated and investigated by an on-site Countercheck facilitator. Brands can participate during the evaluation of the item via the Countercheck platform. If the item is identified as fake, Countercheck will hand it over to customs on behalf of the brand. Genuine items are repackaged and sent on their way.

See how it works here:

Countercheck - Welcome to the future of combating counterfeit from Phil Hamilton on Vimeo.

The platform is premised on a pay-per-catch model, charging the brand a fee for every item caught. The more items caught, the lower the fee per item. So it gives CEP firms the opportunity to generate new revenue streams. Countercheck recoups its installation cost through the initial parcels caught by the technology. This usually takes about three months, at which point the CEP company can start earning revenue.

The benefits of counterfeiting software

The software platform has been designed to provide a solution that benefits both brands and CEP companies.

The benefits for customer brands

The software is free for CEP firms, making its ability to reach into the supply chain to block counterfeit goods a particularly attractive option for the protection teams of brands. Many are dealing with reductions in their budgets to combat counterfeits at precisely the same time that their post-pandemic production is expanding.

The benefits for CEP companies

The solution, founded in logistics knowledge and expertise, also has much to offer CEP professionals:

And with data analytics systems, CEP companies will soon be able to identify hotspot routes and transport corridors of counterfeit goods and help their customers increase surveillance accordingly.

The proof is in the catch

One CEP company trialling Countercheck’s software is a large European hub, which has already succeeded in catching fake copies of some big brand products. 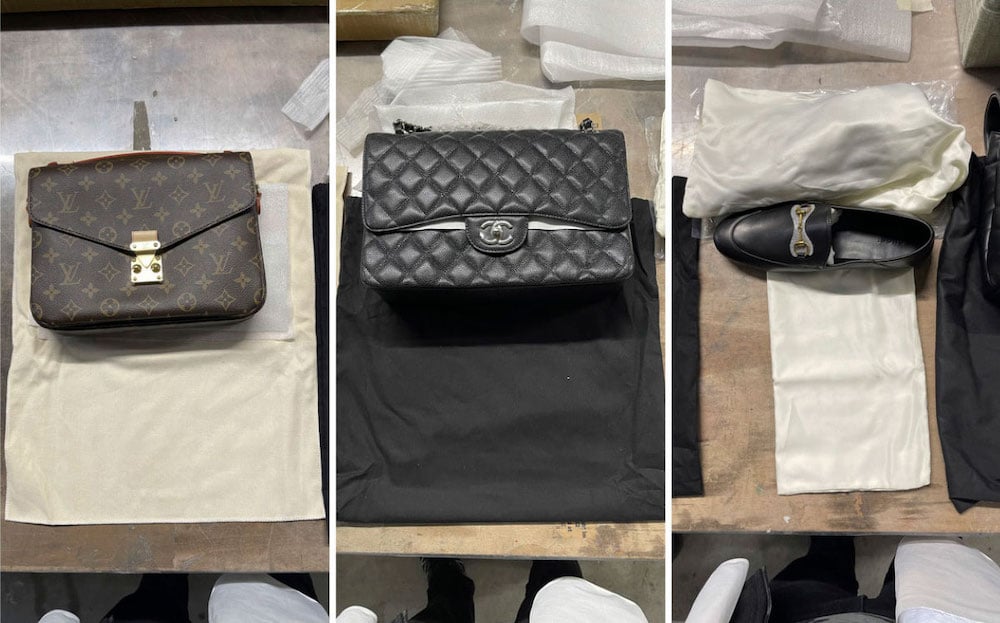 Counterfeit goods successfully caught by a large European hub through the Countercheck software.

With the evolution of new technological solutions, such as Countercheck’s machine learning software, CEP businesses are now in a position to assist their customers counter the trade in fake goods and help resolve deficiencies in counterfeit enforcement. While the proposition is solid for working partnerships between CEP businesses and their customers, it also makes good business sense for the CEP company. The installation of the software requires zero downtime, requires no additional hardware and uses existing chutes and cameras. And before long, CEP companies will start to see a return on this new revenue opportunity. Welcome to the future of countering counterfeits!

How DPDgroup is driving a sustainable CEP business

Swiss Post: It’s time for robots to take their place