The Hermes Midlands Super Hub is one of the most extraordinary examples of the vast potential in automation. The site in Rugby has added an incredible 45 percent to the company’s parcel processing capacity in the UK. In this article, you can get a sneak peek at what a super hub looks like from the inside.

How does the dramatic global rise of e-commerce affect CEP companies?

It depends on who you ask.

Even some major players have observed the increase in parcels with mostly frustration and concern. They have seen an until then familiar market change in front of their eyes. From a letter-heavy industry into a new landscape based on parcels that didn’t perhaps suit the strengths of the company.

Others have been able to welcome the changing waters rather opportunistically almost with open arms. And maybe even, with some investments in new technologies and facilities, take advantage of a new situation and thrive in it.

In 2017, the company revealed its new sensational hub: Hermes Midlands Super Hub in Rugby. A spectacular site that arrives with an unmistakable statement: We are ready to dominate in the parcel age.

The German consumer delivery specialist is no stranger to double-digit growth on a yearly basis. In general, Hermes has done well with the rise in e-commerce. And yet, the new site in Rugby represented the company’s boldest investment yet.

As the gates opened to the 140,000 m2 distribution centre, it represented what has turned out to be an increase in processing capacity by a staggering 45 percent in the UK for the company.

How did Hermes pull off such a spectacular increase? The answer is a new automated system. 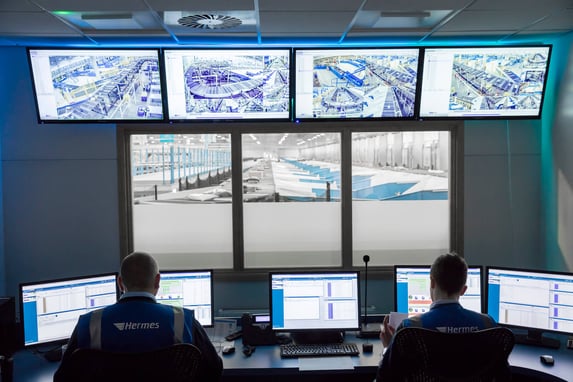 In order to capitalise on the growth of e-commerce and also build on the potential already available from its original UK site in Warrington (30 kilometres away from Liverpool and Manchester), Hermes wanted to establish a new sorting hub of exceptional capacity. One that could take the company to the next level.

The new hub needed a system to serve the multi-channel online retail market which includes parcels in a wide range of shapes and sizes. Flexibility and adaptability were key parameters.

To ensure some similarity in the operational process Hermes also wanted the new system to have commonality with the one in place at the Warrington Hub. BEUMER designed and constructed the Warrington site and was able to build on that system in Rugby.

When arriving at the hub, parcels and polybags are loaded onto the inbound conveyor system at 60 doors. There are ten induction lines for each sorter.

The boom conveyors can extend into trailers to offload parcels. The sizing range goes all the way up to 1200mm in length, 800mm width, 600mm height and weighing up to 30kg. The three-level sortation system is designed with reserve capacities for the busy peak season over Christmas. Talk about flexibility and adaptability.

The feed-ins onto the main sortation system use the latest scanning, volumetric and weighing technologies to identify and then accurately profile parcels. Automatic checks are carried out on each parcel to ensure they have been labelled correctly before they are transferred onto the sortation system itself. 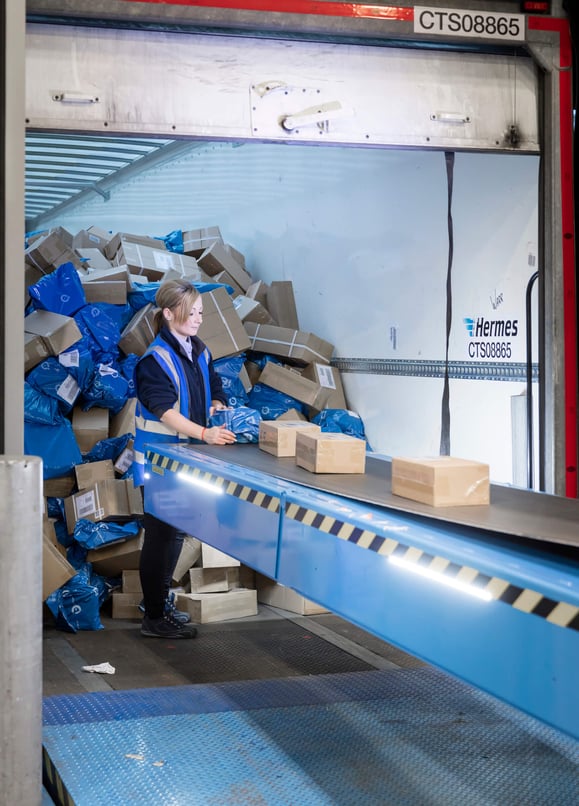 Inside the automated sortation hub, parcels can be loose loaded or containerised using a standard fleet. This allows Hermes to fully integrate their hub fleet and operate as a single centrally planned network.

Finally, parcels exit down 60 spiral chutes to the delivery trucks, at any of 174 docks.

Despite all its different facets, the entire sortation process is completed in just two or three minutes. Emphasising that the Rugby Hermes distribution centre is indeed super - in terms of production, quality and speed.