How does a relatively small site manage to turn itself into a high-capacity distribution centre? For Austria Post, the answer was the right sortation system design. In this article, you can learn about automated parcel sortation and a CEP company that outperforms its size in an era of increasing online orders.

Austria Post faced a challenge. A new situation in the market that essentially represented a positive development. But a challenge nonetheless.

Parcel shipping was growing in Austria. Perhaps exploding is the more accurate term to describe it. Just like in most regions this past decade, the number of parcels was increasing at a rapid pace. As a consequence, the company’s distribution centre – located in north-eastern Austria – could no longer keep up with the influx of parcels it had to process on a daily basis. That the distribution centre had to move somewhere else was inescapable.

The decision was made to move to Wernberg, in Austria’s southernmost state of Carinthia. An ideal location in the sense that it is placed between two big cities, Villach and Klagenfurt, and with an easy path to and from the nearest motorway. In theory, it appeared to be the perfect solution.

But one big problem still remained: The distribution centre in Wernberg was also a rather small site within the Austrian postal service. Bigger than the previous site, but was it enough? Unfortunately not.

Austria Post had to adopt a new system for its distribution centre. The criteria was a system with the ability to operate at high capacity, but in a comparatively little space.

In this article, we explain what the company came up with.

Efficient use of floor space

Austria Post decided to base its new distribution centre in Wernberg on a high-capacity tilt-tray sortation system. The result was stunning.

The new system has a footprint of just 5,000m2 which leaves as much free floor space as possible in a facility with only 12,000m2 of floor space.

Such an efficient use of available square metres is a spectacular achievement in its own right. To top it off, the system handles parcels of a large variety in terms of sizes and shapes - a particularly valuable feature in today’s sprawling landscape of online shopping - with care, speed and accuracy.

Let’s take a closer look at how the system works. 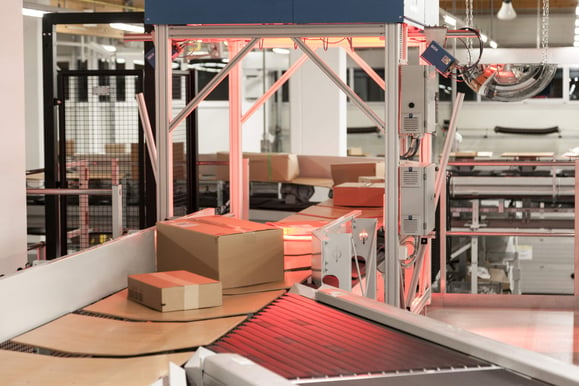 When a truck docks at the Wernberg hall for unloading, a staff member places the parcels on a telescopic belt conveyor that is both horizontally and vertically adjustable. On the belt conveyor, the weight of each pack­age is accurately calculated and registered.

The shipments then progress onto the sortation system and through the use of barcode recognition each parcel is assigned to the correct destination. In addition, there is a laser system that continuously detects each parcel’s volume and reports to a high-level control system. In instances where a barcode cannot be read, the parcel will instantly be routed to a manual handling station. Here, a staff member is waiting to inspect and process the parcel before bringing it back to the sortation system.

Having reached the chute, each parcel automatically transfers on to telescopic belt conveyors into swap bodies to be loaded onto trucks.

The whole automated system is as regular as clockwork.

The new sortation system is not just designed with a capacity to process large amounts of parcels, it's also equipped with energy-efficient drives. As a result, the servo drive-based OptiDrive reduces both power consumption and CO2 emissions.

The contact pressure of the drive wheels is adjusted automatically, according to the required driving power – even for braking – which prolongs the service life of the wheels and lowers maintenance and operating costs.

The ability to adjust the driving power boosts energy efficiency all the way to 90 percent. The BG Sorter is equipped with carrying wheels that are unusually large. This results in a 25 percent reduction in rotation frequency, with the added bonus of not just less wear and tear but also less noise, which improves the working environment for staffers.

Overall, what we learn from this particular Austrian automation case story is that even a relatively small site can adopt an extremely efficient sorta­tion system for its main distribution centre. A system that is also environmentally friendly and pleasant to work in for employees.