Do you want to learn how a Scandinavian postal giant transformed its distribution centre with an automated system that handles everything from loose load to containerised and odd-sized items, while also keeping manual intervention at a bare minimum? Read this case story about PostNord.

If you are a large national postal company, the most important job has always been to deliver mail to every corner of the country. To do it well and to do it efficiently. That is the main objective your entire operation has revolved around.

Imagine being that large national postal company when suddenly a dramatic shift in consumer behaviour changes the market that you have been navigating for such a long time. That almost abruptly you experience an incredible rise in the number of parcels that your distribution centre must handle on a daily basis. And then simultaneously the amount of mail is taking a vertical drop.

What you have then is a situation where you need to handle an increasing amount of parcels, including odd-sized parcels, and at the same time, you have to reduce the average delivery time of each parcel. This is suddenly your competitive edge. The game has changed in front of your eyes. You need to come up with a plan in a market that is quite different from what you have been used to.

The first impulse might be to simply load a higher number of trucks into the streets.

But the thing is that logistic headaches are rarely that simple to solve. Definitely not in today’s world.

The Scandinavian logistics giant wanted to improve its product, by slashing delivery times and bolstering its customer service offering.

To succeed, PostNord needed to reinvent their entire operation. Built a new one for flexibility and efficiency. Invented for increasing volumes of parcels and designed to handle peak holidays, such as Christmas and Black Friday, while also cutting down on truck movements.

However, improving the efficiency of its opera­tion and lowering the cost per item wasn’t the only goal that PostNord had.

Building their businesses with an eye on environmental responsibility is something that companies most places in the world are getting used to.

In Scandinavia for example, companies are legally obligated to run their business in a climate-friendly manner.

For a company like PostNord, this reality adds a green dimension to any logistics challenge.

It needed to come up with a more innovative solution to its business challenges than simply buying more trucks.

Instead what the company did was adopt the industry’s most energy-efficient high-speed sortation system. An investment in improving future business operations, while also fulfilling their green ambitions. 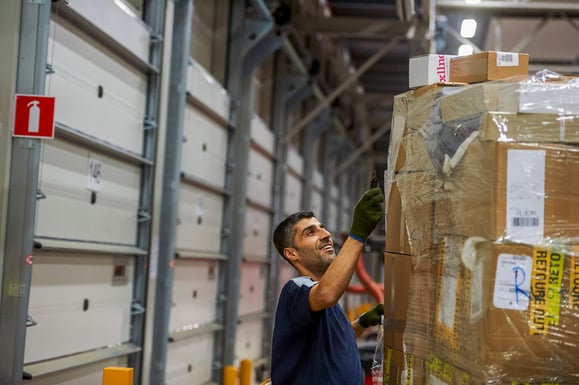 To achieve all business goals, PostNord had to equip its Veddesta distribution centre - which is located just outside Stockholm - with the most advanced high-speed sortation technologies available.

BEUMER Group’s cross-belt sorter became the foundation of the new system. The result: a high-speed solution designed with conveyors, automated inductions, scanners and automated parcel singulators that maximise the efficiency of the parcel sorting process.

The system’s ability to automate the receival of parcels and deliver them to appropriate dispatch points creates extraordinary operational flexibility with as little manual intervention as possible being necessary.

Learn more about how automation can benefit distribution centres.

There is also a strong environmental element to the system.

The use of Linear Synchronous Motor (LSM) technology enables the sortation system to cut energy consumption by up to 75 percent compared to sorters with conventional motor technology.

Adding automatic singulators to the system played a key part in streamlining the sortation process.

As parcels arrive at bulk in-feed areas using a combination of fully-automated container tippers and boom conveyors, the parcels are grouped and fed into the singulators.

Parcels enter the singulator’s in-feed mo­dule in bulk. Then they travel through a set of skewed roller conveyors onto a section of individually-controlled belts. This dynamic process automatically conveys parcels into a single stream of evenly-spaced items, which are conveniently ready to enter the automatic induction to the cross-belt loop sorter system. The result is a time-saving automated sortation process of a large variety of different items that have been brought in as loose load, cages and also pallets.

In addition, the singulator detects any double parcels, such as those which are side-by-side or overlapping, as well as any that are too long, too high or too thin. These items are diverted to a separate conveyor line for re-introduction to the parcel stream.

This feature, in particular, is absolutely critical in today’s landscape of odd-sized parcels from e-commerce. 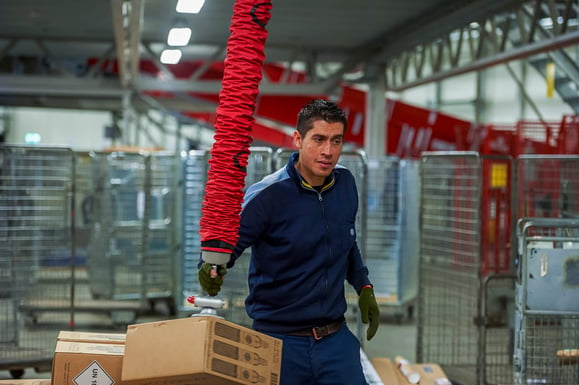 The business case for investing in the new Veddesta Terminal was based on minimising manual intervention, while also maintaining high levels of customer service and speed. The new system has enabled PostNord to achieve its goals. The company has increased the flexibility and speed of its sorting process, while drastically reducing the cost and environmental impact of the entire operation.

A  complete win-win scenario for the Scandinavian logistics company.

How to improve visibility to optimise CEP operations

Has the time for robotics finally arrived?