Standards and regulations requiring 100 percent baggage security screening and traceability have major implications for airports. But authorities around the world have started to accept in-tote baggage screening provided by the Individual Carrier System (ICS) baggage handling system as a solution that can combine safe baggage handling and transport, together with an outstanding tracking rate. We take a look at this and other benefits of tote-based screening systems for airports and security authorities.

The global requirement for 100 percent tracking

In order to meet today’s stringent security requirements, airports must be able to provide 100 percent track and trace of each item of baggage at every point throughout their baggage handling systems.

In the USA , for example, the Aviation and Transportation Security Act 2001 mandated that the Transportation Security Administration (TSA) provide for the screening of all baggage using explosive detection systems. Every passenger knows the procedure for screening his or her carry-on luggage. Basically, the same happens for all checked baggage in an automated process inside the baggage handling system.

The drive for 100 percent traceability received a further push with the European Civil Aviation Conference (ECAC) Standard 3 legislation in 2014. The legislation was designed to move Europe closer to legislation used in the USA. In Europe, airports with screening equipment that complied with ECAC 2 were required to update their systems to meet the new ECAC 3 regulation. In most cases this made it necessary to not only replace the screening equipment itself, but also to modify the connecting lines of the baggage handling system. 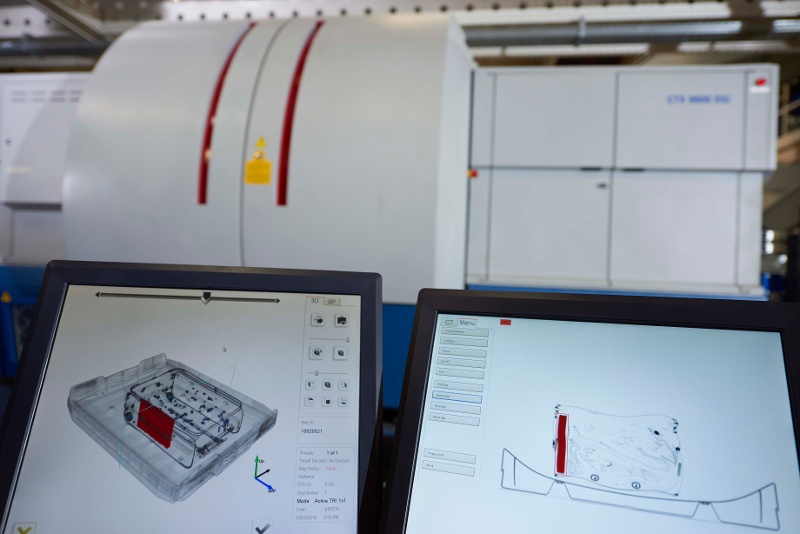 These regulations, often subject to amendments, have significant ramifications for airports. How can different baggage handling systems help them meet these regulatory requirements?

Today’s demand for security is only met if the airport has 100 percent track and trace which can be met by an automated BHS. Modern ICSs offer exceptionally high load sharing of hold baggage screening machines, a flexible matrix design and fast transport and connection between screening areas. This makes it possible for the airport to live up to these security demands without creating bottlenecks in screening due to insufficient staffing or resources.

Choosing the right ICS system design will mean a fast and easy baggage flow management solution where the hold baggage screening area can cope with the maximum throughput capacity of the baggage handling system. With the hold baggage screening being an integral part of the baggage handling process, the system has to be designed to balance loads between redundant routes, which will ensure optimum usage of available Explosive Detection System (EDS) resources to keep the number of screening machines to a minimum.

In the USA, for example, the TSA started in 2015 to test the effectiveness of the tote-based system across a range of real-life conditions and situations at its full-scale Transportation Systems Integration Facility near Washington, D.C. Elements assessed included tracking, throughput, imaging, sorting and the detection of missing, unknown and oversized bags. This in-depth evaluation also recorded how rapidly the ICS technology associated specific bags with the individual totes.

Following the tests, workshops and design submittals, TSA approved the first tote-based system (the CrisBag independent carrier system) in March 2017. The TSA certification applied to both the design and operation of the system. When used with Morpho’s CTX 9800 DSi explosives detection system, the CrisBag totes met TSA standards for detection and false alarm rates.

The following images compare the BHS with screening matrices based on conveyors and ICS. 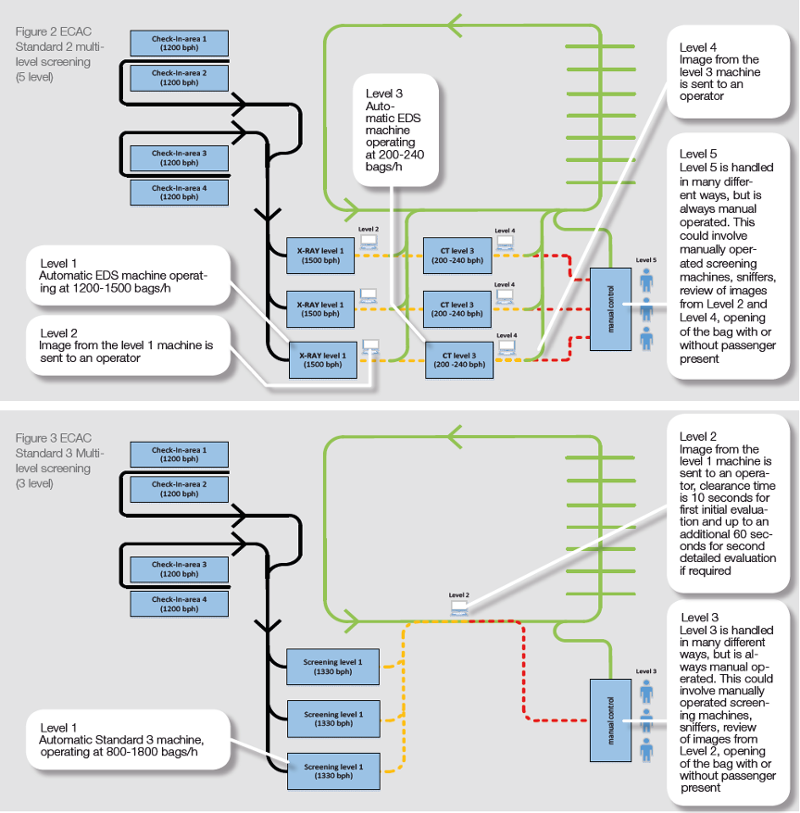 The second illustration (Figure 3) shows an ICS-based screening matrix in three levels, in which the baggage travels in a continuous loop until a decision is made on the scan. The bag either continues down the line or is asked to come back for the next level of inspection. But the loop is all that is now required and not a long line of conveyors.

As a result of the approval, the TSA’s current Planning Guidelines and Design Standards for Checked Baggage Inspection Systems of August 2020 include ICS as an alternative type of baggage system to the traditional “friction belt on slider bed” baggage conveyance technology, that utilises other means to accomplish the same goals.

At section 3.5.1, the guidelines explain:

They also clarify what the TSA requires of ICS:

“... once loaded onto the ICS carrier, the bag must remain associated with that carrier throughout the screening process. Upon arrival into the CBRA, the bag cannot be removed from the carrier until an operator is available to screen the bag. Once the bag is removed from the carrier by sliding the bag (lifting should not be required), the carrier must remain at that location until the bag has been screened and loaded back onto the same carrier to maintain positive tracking. Depending on the CBRA design, bags may remain in the carrier during the physical inspection process.”

The CBRA solution described in the guidelines is, in fact, the solution now in operation at San Francisco's Harvey Milk Terminal.

The guidelines note that the TSA is presenting the ICS concept to provide planners with a broad range of potential CBIS concepts for consideration during the pre-design phase. The certification applies to US airports and for US pre-border clearance, making migration to a common-use model more attractive.

ICS-based screening is implemented in the USA

The first ICS-based BHS to go live in the US was at San Francisco’s new Harvey Milk Terminal 1 in June 2020. The system is designed for shared airline use and incorporates an integrated security screening process.

ICS has enabled 100 percent tracking with each bag remaining in the same tote throughout the screening process and has completely eliminated Level 3 re-screening. The re-routing of baggage to conveyors is no longer required.

Importantly for the TSA, the ICS solution has also optimised the working conditions of its agents at the CBRA inspection stations. Physical lifting of any suspect bag is no longer required, as the bag is presented to the agent in the tote and parked in front of him.

The system collects the ‘alarmed’ bags from different screening zones and transports them all to one, centralised area where the TSA conducts its intensified investigation. The bags are then transported back to the respective airlines. TSA personnel no longer have to lift bags, carry them over aisles and put them down again. Nor do they have to unload and load bags before and after they pass through the x-ray machines, as each bag remains in its tray.

Because the ICS-based sortation is so precise, the TSA has approved the mixing of ‘good’ and ‘suspicious’ bags on one line – which the conventional conveyor-based system does not allow.

Tote-based screening has also been approved as meeting ECAC 3 standards, with the CrisBag solution being the first tote-based baggage system to have been certified for ECAC 3 screening.

The certification was initially based on the integration of the Smiths Detection HI-SCAN 10080 XCT EDS but was extended with approval for the integration of Morpho, L-3 Communications and Nuctech screening solutions. These additional approvals provide airports and enforcement authorities with additional flexibility in their choice of screening equipment. 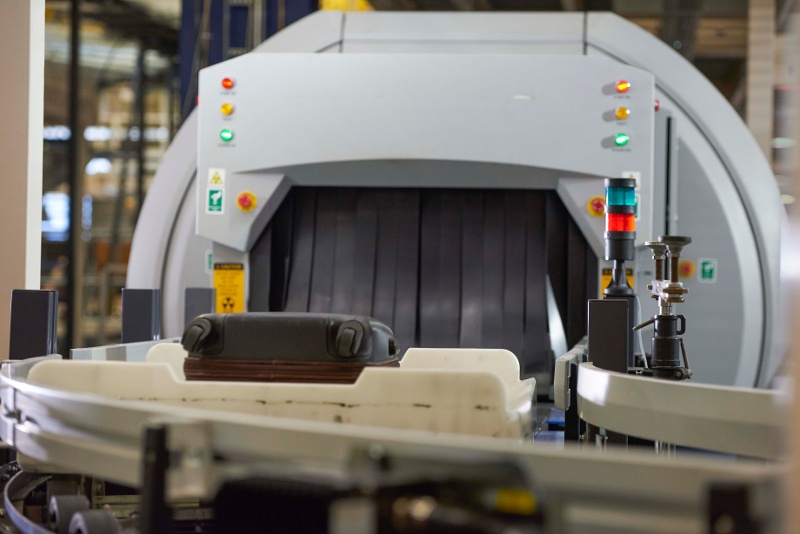 The benefits of tote-based baggage screening for airports and authorities

In accepting in-tote baggage screening systems, both airports and the authorities stand to gain many benefits, including:

In our view, in-tote screening systems can help airports and airport security authorities meet the strict demands and compliance obligations of regional security regulations. But they not only provide a way forward for satisfying governing standards. We believe they bring added advantages, such as optimising the use of staff and resources within the screening area and improving the throughput and efficiency of the baggage screening process. Moreover, ICS systems using tote-based screening are modular in design and are easily extended to meet future requirements.