No matter the number of routes, most flights are leaving at the same peak times. That means more destination chutes to handle the baggage make-up. How does an airport find the space for this in an already cramped environment?

Present day early baggage storage (EBS) systems are assets that airports can optimise. By realising their potential beyond early baggage storage only, they can become so much more. Paired with the right storage and baggage handling system technologies, they can be transformed into multi-bag storage spaces, greatly improving baggage handling processes and increasing airport storage efficiency. The purpose of the conventional EBS system was to have a place in the airport where layover or transfer bags and early checked in bags could be stored. The system was driven by transfer flights, segregation criteria and the need for random access and was really only relevant for larger airports. It involved the handling of pieces of baggage individually, many dispatch areas and pickups by tug and dollies. The system idea is good but could be more efficient.

As airports have changed, so must the thinking on EBS systems. The demand for space and other pressures on airports today calls for a revision of storage systems and how they might be multi-purposed to increase efficiency.

As Andrew Price, Head of Airport Operations at IATA, has put it: "Baggage is often compared to a factory, but did you ever hear of a factory with no audit on their goods in, nor a record of the goods out? This is exactly what we have in the baggage world." 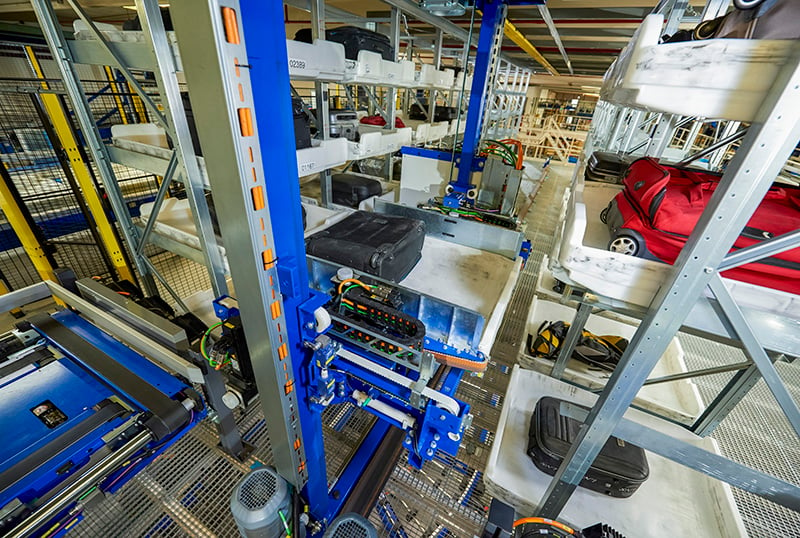 Thinking of baggage handling in terms of factory or warehousing systems is particularly useful, as warehouse efficiency translates very well to airports in respect of the way baggage could ideally be stored and handled. An airport can store many pieces of baggage, and in the same mode as warehouse production, then pick and sort baggage in batches when there are enough orders to make a batch of each unit. With the right know-how in controlling the batches, airports can become very effective ‘bag factories’. This storing and batching is an ideal solution for all airports experiencing crammed baggage halls, with no space to expand the make-up area.

Baggage is often compared to a factory, but did you ever hear of a factory with no audit on their goods in, nor a record of the goods out? This is exactly what we have in the baggage world.
- Andrew Price, Head of Airport Operations at IATA

The ‘bag factory’ has become the ultimate in baggage handling systems. But how does the batch building and storage actually work?

The batch building and storage concepts

Let’s take a closer look at the warehousing concepts of batch building and storage, as applied to airports.

Batch building is a principle that optimises the loading of bags for specific flight departures. Once a bag has been checked and screened, an operator will ‘pull’ batches of bags destined for the same flight from the storage (rather than the random pushing of a bag through a conventional system). When building a batch of bags in the storage, the control system will alert the operator that a batch is ready for loading. The operator can then release the batch and load it effectively within minutes. 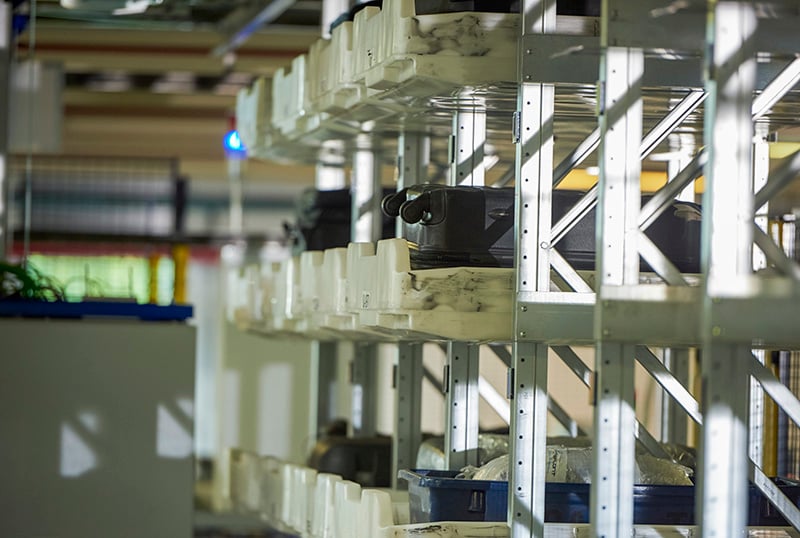 Batch building means that one chute no longer must be open for two hours. It also means that an operator no longer needs to walk back and forth to move the occasional bag over to the dolly. The operator simply handles all the bags for one departure at the one time. Speed loading batches in this way, therefore, is both time saving and more ergonomic.

In the past, pieces of baggage were typically stored at airports in storage lanes or dynamic loops. Today, racking and crane systems are proving to be more efficient in many airports. These systems are similar to a high-bay racking system in which bags are stored individually on shelves. They are often tote-based systems that use just the one tray, end-to-end - a bag is loaded into a tray starting at check-in and stays in the tray until it reaches the loading area.

The advantage of racking is that while it has the same storage capacity as the conventional storage lane, it occupies substantially less footprint. A conventional storage lane system, for example, can hold 800 bags using 1200m2, while a flexible racking system has the capacity for the same 800 bags, but inhabits just 730m2, saving around 40% of the valuable floor space. 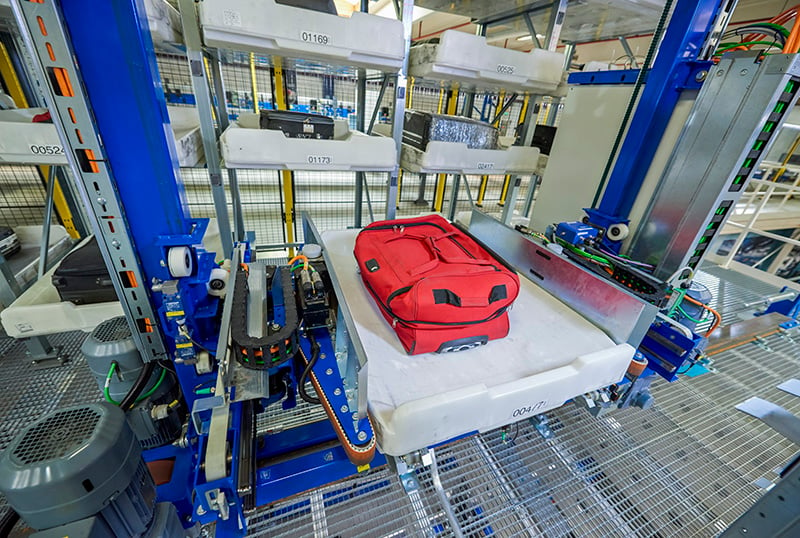 Let’s take Bergen Airport in Norway as a great illustration. It is one of the first airports to install BEUMER Group’s CrisStore® system and make full use of the flexibility of dynamic storage in their operation. This rack-based storage with CrisStore at Bergen Airport features the following:

At Bergen, bags are routed into the dynamic storage which is monitored and controlled by the baggage handling system controls and linked to ground handler planning via a workstation. When the display shows that there are 40 bags ready for a single flight, the handler can request the bags from the store, as a batch, to fill a single ULD or dolly. The system incorporates 100% tracking which allows operators to retrieve any bag at any time, as well as ensuring accurate real-time inventory control.

Given its modular construction, it’s possible to expand the capacity of the system for more storage, while providing a fall-back option during a system failure. It also interfaces well with existing systems.

The benefits of multi-purpose storage for an airport

So, what do airports stand to gain from evolving their conventional EBS systems into multi-purposed storage systems? The biggest advantage is the efficient use of floor space in the baggage hall that comes with only handling baggage when needed or when ready. This avoids the need to keep baggage randomly transported in loops that take up space and capacity.

With multiple use storage also comes the possibility to store not only early bags, but empty totes and even goods for the retail area. Further, batch building or on-demand storage is possible, along with storage for reclaim on-demand bags that need to wait in the system until the passenger calls for it. What’s more, the system generates a more efficient use of the operator's time.

Dynamic multi-use storage offers airports a great way to transform their existing EBS system or introduce a baggage storage with a difference. They can take advantage of increased storage capacity, better use of airport building space and the increased efficiency it offers its operational baggage handling process.

Download the whitepaper "The ultimate Baggage Handling System pulling airports into the future."

An entry into the batch building concept for baggage handling systems

Baggage claim on demand: What's in store for the future?