What was behind the introduction of the ICS baggage handling system 50 years ago?

The implementation of the first Individual Carrier System (ICS) for baggage handling in the world has celebrated 50 years! On 14 March 1972, an ICS was introduced to the Middle terminal (what is now T1 and T2) at Frankfurt International Airport and is still operating today.

BEUMER Group had the opportunity to talk to baggage handling consultant, Matthias Frenz, President at Logplan LLC, to uncover why ICS was first introduced to the Frankfurt airport and why it continues to evolve as the solution of choice for airports across the globe.

Why the ICS was first introduced to the airport

After two years of intense commissioning, an ICS was introduced to Frankfurt Airport’s Middle Terminal in 1972. According to Frenz, the reason behind its implementation was that Frankfurt wanted to become a transfer hub. He explains:

”As a sizeable hub, speed was of the essence and Frankfurt wanted to minimise transfer time to 45 minutes. So, the baggage handling professionals needed to be able to put a bag in a tray, programme the tray with the flight destination and know that the bag would stay there without having to reprogramme the bag and its destination again.”

While some controls have needed to be replaced, what’s remarkable is that the same ICS is still in use today in one of the largest baggage handling systems in the world. And many airports around the world followed suit, depending on their individual needs and where ICS technology could perfectly address their touch points.

ICS is introduced around the world

After Frankfurt, the ICS was adopted at Paris’s Charles de Gaulle Airport and at the international airport on Jersey Island, says Frenz.

In the late 1990s, ICS was also introduced to Munich Airport – one of the most complex, multi-layer systems in the world today – and Leipzig/Halle Airport in Germany. Frenz states:

“For both Munich and Leipzig airports, the underlying goal was to reduce the misreads they were experiencing with their conventional systems and ICS was seen as the solution.”

Distance was particularly important for Leipzig as it was developing another terminal some way from its check-in. It was crucial that the bags could be transported over a distance but end up in the right area. ICS could ensure that.

Just as with the first implementations of ICS, its deployment in both big and small airports around the world has been in response to particular challenges.

Singapore Changi Airport introduced ICS in 2008 for a number of reasons. It had very short connection times between flights and wanted to reduce baggage transfer times. It also needed a faster baggage transporting solution that could achieve 100% tracking. In addition, it wanted all baggage to be in individual totes and to implement early baggage storage.

With ICS, Changi is able to meet the short connection times, and reduce the bag in system time down to 15 minutes. ICS technology also facilitates its EBS.

Ottawa International Airport also had a number of objectives in deciding to completely replace its conveyor-based system with a full ICS in 2015. It was committed to reducing energy consumption and increasing efficiency. But it was also looking for a system that could be managed centrally and required low maintenance. As a US-Trans Border facility, 100% tracking was also particularly important.

For Ottawa, its ICS system has more than paid off. According to the Ottawa International Airport Authority President and CEO, Mark Laroche, ICS will save the airport CAD 500,000 annually. It consumes less power and provides the full tracking required. It has proven to be an exceptionally low-maintenance solution that also enables a proactive maintenance schedule, helping the airport fulfil its environmental obligations. 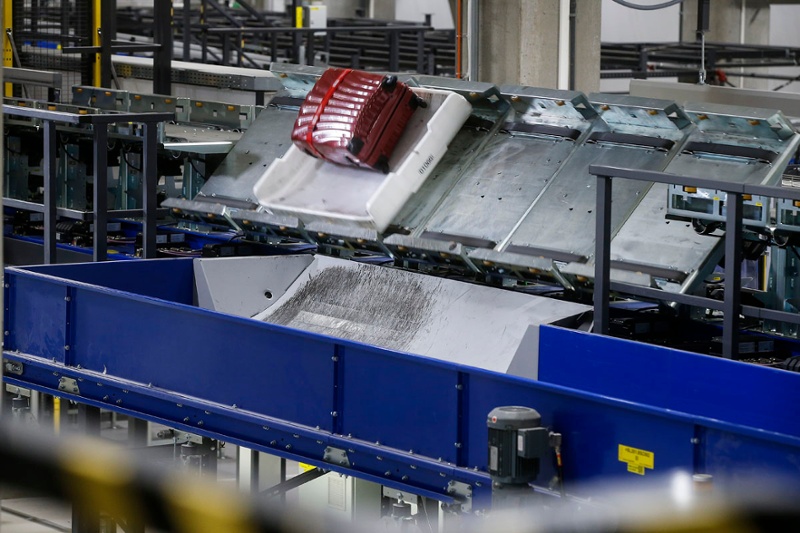 To Bergen, the ‘baggage on demand’ ICS offers, has reduced the overall system footprint as it does not require the same number of destination chutes. The energy consumption is considerably lower with ICS, being in line with Bergen’s aim to be a greener airport.

Similarly, San Francisco Airport was looking for a green option when deciding on ICS for its new Harvey Milk Terminal, put into effect in 2021. As SFO is a shared-use terminal, 100% tracking ability was also essential. SFO was also mindful of passenger satisfaction and wanted a BHS that could deliver bags on arrival at the shortest possible time. Low operational costs and a quick ROI also factored into its decision.

With its ICS, SFO has reduced system time for arrival bags to as low as four and a half minutes. The ICS also received TSA approval for a much improved CEBRA operation and has completely eliminated Level 3 re-screening. SFO has found that bag jams are now virtually non-existent. What's more, SFO is now the first airport terminal in the world to earn Platinum certification in the LEED v4 programme (Leadership in Energy and Environmental Design standard of 2014).

ICS technology was first developed as a baggage handling solution to meet the particular need of Frankfurt Airport at the time: reduce transfer times. And the technology has been applied to existing terminals around the world to meet the further needs of airports, such as occupying a lower footprint, being able to provide greater efficiency in terms of faster baggage processing with 100% tracking and requiring less maintenance and in achieving energy reduction goals. It's any wonder Frankfurt's ICS is still in place and is now in its 50th successful year.